One of the industries that is booming and pulling massive weight in Nigeria is the Music Industry. Over the years, the music industry has produced countless number of individuals from various states and ethnic groups in Nigeria, who have made their mark in the industry.

Flip through social media handles of different people and watch stories about these Celebrities (as they are popularly referred to) pervading the Space. Everyone just wants to identify with them.

Meanwhile, you will agree with me that major credits goes to them for their Successful Music Career, whereas there are some back scene actions taking place that pushed these Men and Women who we know as Celebrities to Lime light, but shockingly little or no recognition is given to their Music Producers, whose Effects to some extent end behind Scene.

However that may be; this post doesn’t aim at creating some sort of differences or distinctions, between people, and rather it aims at providing a quick rundown of these men who have been effortlessly working if I would say, as unsung heroes.

So you are definitely going to do yourself good, sticking around as we begin to chronicle the names of these men who are top guns in Music production in Nigeria, Together With their Tags.

Top 10 Nigerian Producers and Their Tags

Below on this very section, we’ll be looking into the comprehensive list of the top Nigerian producers and their tags respectively,

The name PHEELZ has a resonating impact in the Music Industry, and one key moment that didn’t go down well with many at First, but was later accepted was when, the Music Producer changed his introduction tag from “Pheelz Mr Producer!”  to “Riddimahcoolayo” and not “Rhythm and Cool and Young,” as many popularly misquoted, which made the producer himself come out to correct.

The stage name pheelz stems from the Producers real Name, Phillip Kayode Moses. He is responsible for classic hits from the record label such as 2014 Olamide’s 2013 banger, Durosoke to hits in recent times such as Fireboy DML’s Scatter.

It wasn’t then Surprising when Pheelz’s work in the industry was recently recognised on the Headies platform where he won the award of Music Producer of the Year in 2020.

“Riddim!” that’s the tag ! whenever a Sarz record goes off, the Riddim also phases out. The music producer’s Sound has that  characteristic Sound of dark and heady drums done in an underlying tempo, capable of sweeping you off your feet, vibing to the rythmic beats.

The music producer’s legacy of sound reached the apex way back 2012 where he bagged two awards as Producer of the Year.

Going by the tag, “Yo Rexxie pon this one!” it has quickly become a household name bringing memories of seemingly eclectic street-hop inspired beats.

The Music Producer goes by the name Eze Chsom Faith, off the stage. Rexxie has worked with top acts such as Burna Boy, Naira Marley and Zlatan and in 2020 delivered the smash hit KPK with Mohbad. At the end of the year, he was named the African Producer of the Year at the Soundcity MVP Awards.

Going by the Tag, ‘Giddem!’ the Young Nigeria Music Producer has had his fair share in the game. P Priime has an impressive catalogue of hits from Cuppy’s Gelato, Fireboy DML’s Like I Do to Peruzzi’s Southy Love.

Born as Peace Emmanuel, his only two notable hits of the year are ‘Anoti’ for Wizkid and ‘Ozumba Mbadiwe’ for Reekado Banks. He also produced ‘Energy’ and ‘Fada’ on Zlatan’s Resan.

His songs resonates heavily with the tag  “Master!”. Born Sunday Nweke, the music producer was named Producer of the Year in 2015 and 2016 by City People Award and Nigeria Entertainment Awards respectively.

He goes by the tag “Kukurukoo” with notable hits like ‘Bounce’ for Ruger.

Although he only produced ‘Bounce’ for Ruger in terms of hits, he has been a revelation all year. Unarguably he has produced Nigeria’s stunning sounds of the year.

Making Waves with the tag “Niphkeys,”  in the thriving street-hop scene, Niphkeys is the producer behind hits like Zinoleesky’s Kilofeshe and Naira Marley’s Koleyewon. He also shows his versatile skills with his production work on DJ Jimmy Jatt’s Buju and 2Baba featured Worry Me.

That killer tag, “It’s Kel P vibesss” is one that identifies and sets aside the refreshing sound creations of Da Bully as he refers to himself.

He is Udoma Peter Kelvin, a top class music producer with two Grammy nominations to his name, for his work on Burna Boy’s African Giant and Skip Marley’s Higher Place EP. He was a co-producer of  the powerful Made in Lagos, Ginger which features Grammy-winning acts, Wizkid and Burna Boy.

“If it’s Spax then it’s gotta be a right one” that is the tag, that has proven without doubt to be True.

Olufemi Samuel is his Name. His works mostly feature some nice quality and pleasant blend of trumpets and he has created singles like Oxlade’s DKT, Tems’ Damages, Adekunle Gold’s My Ex, and many other classic hits.

He goes by the tag,  “GMK ’bout to make that dough” a sentence which flows at the end of works he has produced and serves to thrill his fans who have come to relish the pleasantness in his smooth finishing work. Quudus King, GMK is a seasoned music producer and audio engineer who operates within the Monster Boys collective which has Santi and Odunsi as frontliners.

There we have the list guys, who amongst them is your Favorite Music Producer, was there any name missing? then do well to intimate us about it. 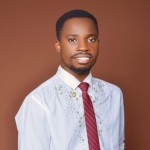 Benson Chidiebere is a business and tech content creator on Busy.ng.